I've been on a bit of a guitar-buying kick lately.  When it comes to a really good-quality instrument at a low price, I have a tough time saying no.  (I've actually written an entire post on my affinity for budget instruments.)

Guitars have such a wide variety of shapes, styles, and sounds, that it's tough to limit yourself to just one.  As a [mediocre] slack-key player, having multiple guitars is also convenient because I can leave them in different tunings, and simply pick up the guitar for the song I want to play.  (Something I wouldn't have the luxury of doing with higher-priced guitars.)

Here is my humble collection of bang-for-buck guitars I've collected along the way: 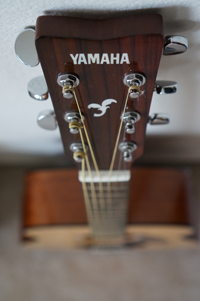 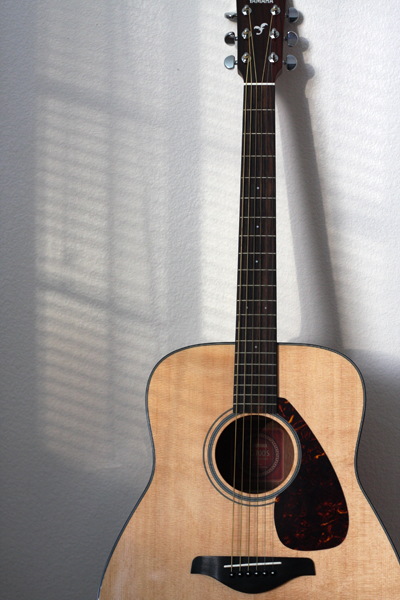 This was the first acoustic guitar I bought for myself.

After doing a lot of research on the web, I decided on the Yamaha FG700S, as it is consistently recommended as one of THE "best beginner guitars under $500."  (Quite a bit under, actually.  I think I paid under $200, shipped, for a bundle that included a stand, gig bag, string winder, and a few other accessories.)

I was shocked at the quality of this guitar.  It looks great, sounds great, and perfectly playable out-of-the-box.  The quality is superb, and it has a nice robust feel to it.  This guitar is meant to last.

After about a year of playing though (and learning more about guitar sizes and shapes), I began to yearn for an OM/000 size guitar (the large dreadnought just wasn't all that comfortable, especially for someone who grew up as a uke player).  I also wanted a wider nut, since I mostly play finger-style.  (The FG700S has a 1 11/16", and I wanted something with a 1.75"-1.8" nut.)

Admittedly though, my FG700S still gets the most playtime of my guitars because I keep it on a stand within arm's reach from my desk.

One of my biggest regrets is having missed out on the Silver Creek guitar deal that musiciansfriend.com had going on a few years ago. The Silver Creek T-160 and T-170 were amazing guitars at under $100.  So much so, that many were buying one of each, just to have both a mahogany (T-160) and a rosewood (T-170) in their collection.

Alas, by the time I got keyed into these guitars, they were all sold out, and the Silver Creek brand, discontinued.

To this day, I still search ebay in hopes of finding one for sale, but you'd be hard-pressed to find someone that wants to part with theirs.

Rumor on the web however, was that Recording Kings were being made out of the same factory (if not re-branded versions of the same guitars). So...

This lead me down the path of looking into the Recording King RO-10 as my next-choice of reasonably priced OM-sized guitar.  As I was looking for one however, I found a lightly used RO-26 at a really good price and pulled the trigger! 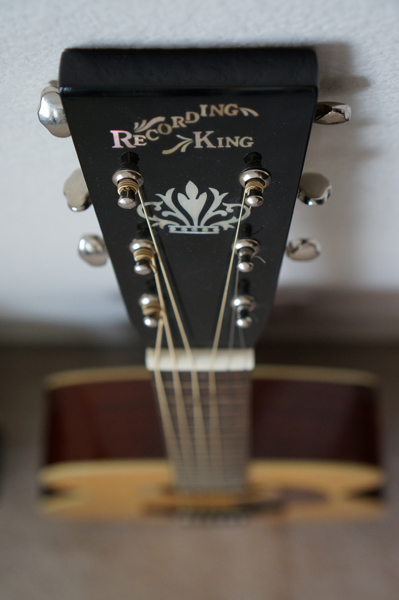 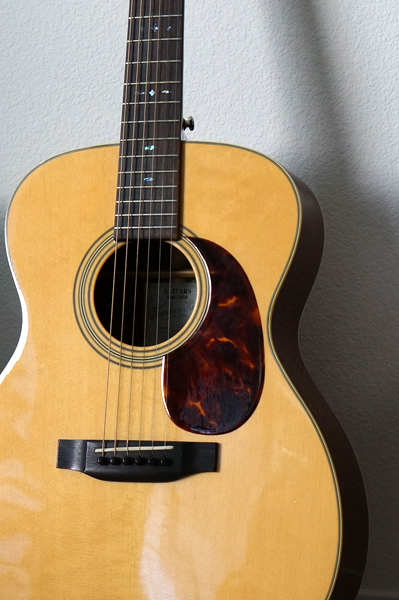 The previous owner added a pick guard (not my first choice, style-wise...but I suppose "function over form"), and he also included a really nice hard case to go with it.

I have to say, I couldn't be happier.  If I had to pick a favorite of my guitars, this would be the one.

The RO-26 turned me into a huge fan of Recording King, which leads me to... 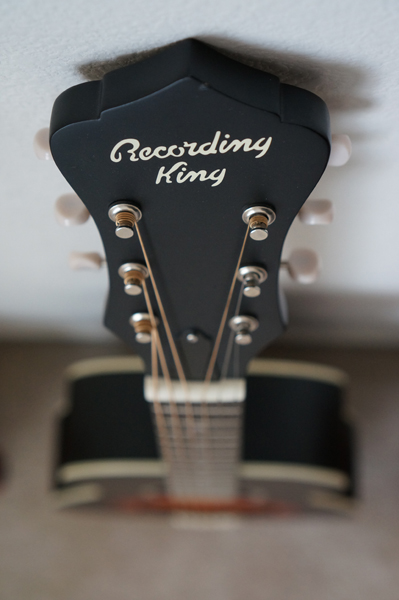 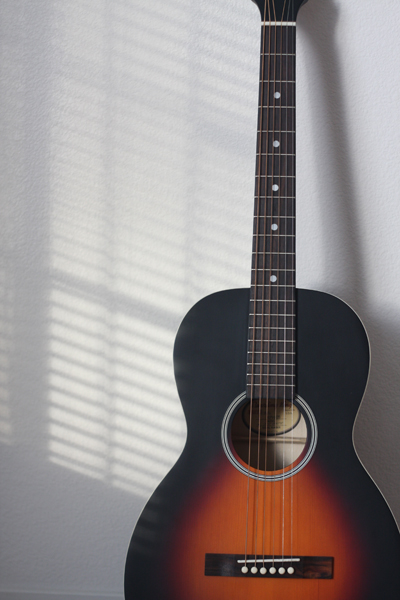 I always thought a small parlor guitar would be nice-to-have (comfortable to hold, and easier to take around to friends' houses and such).

The new "Dirty Thirties" line has been getting astounding reviews for the price (the RPH-05 sells for about $200).  So when I found one for $130 new, I couldn't pass it up.

It's a great little guitar.  I'm shocked at the big sound that can come from such a small guitar.  (I was actually worried how well it would respond when down-tuning to open G and drop C, but this thing can kanikapila like a champ!)  Amazing, amazing guitar for the money.

(I plan to do a full video review on it shortly.  Stay tuned.)

Line 6 Variax 300 Electric Guitar
Ah, yes--my neglected electric guitar.  This was actually the first guitar I bought for myself about 7-8 years ago. 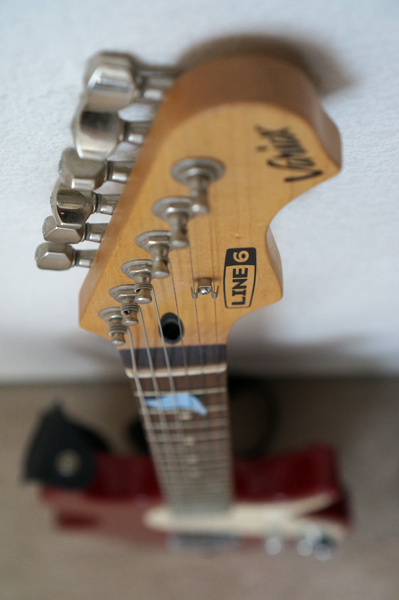 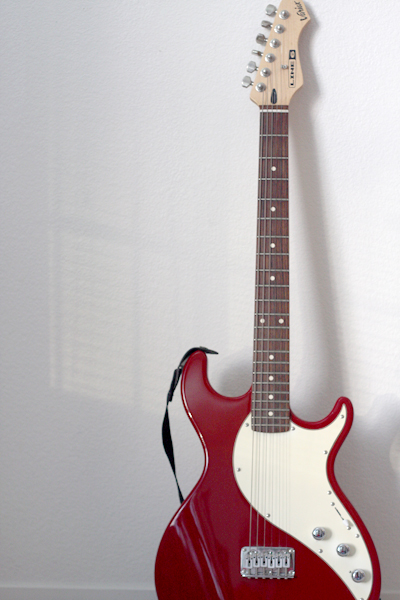 I had never played an electric guitar before, but became obsessed with watching tutorials on youtube and was thinking it would be a fun thing to try out.

Coincidentally, I happened to stumble upon an article on how Line 6 was shaking up the guitar market with the technology in their new Variax models that really spoke to my inner geek.  The Variax line had a digital signal processor built in to the guitar, which could emulate the sounds of virtually any guitar--50's Gibson Les Pauls, 60's Fender Telecasters, semi-hollows, acoustics, even a banjo!

While some traditionalists might snub their nose at the idea, I embraced the concept.  With an MSRP of around $800 though, I put the idea on the backburner for a while.

Then came along the clearance deal on musiciansfriend.com.  They were blowing out the red version only for $299.  (Don't get me wrong, I would have preferred a nice sand-burst or even a black, but not for more than double the price!)

The blowout price was enough to convince me to put in an order (At the time, I also justified it by telling myself that by buying this guitar, I wouldn't need to buy an acoustic. Hah.)

Unfortunately, this doesn't get played a lot these days.  Partly because I don't really have a decent amp for it.  Also because I just prefer acoustics as of late. 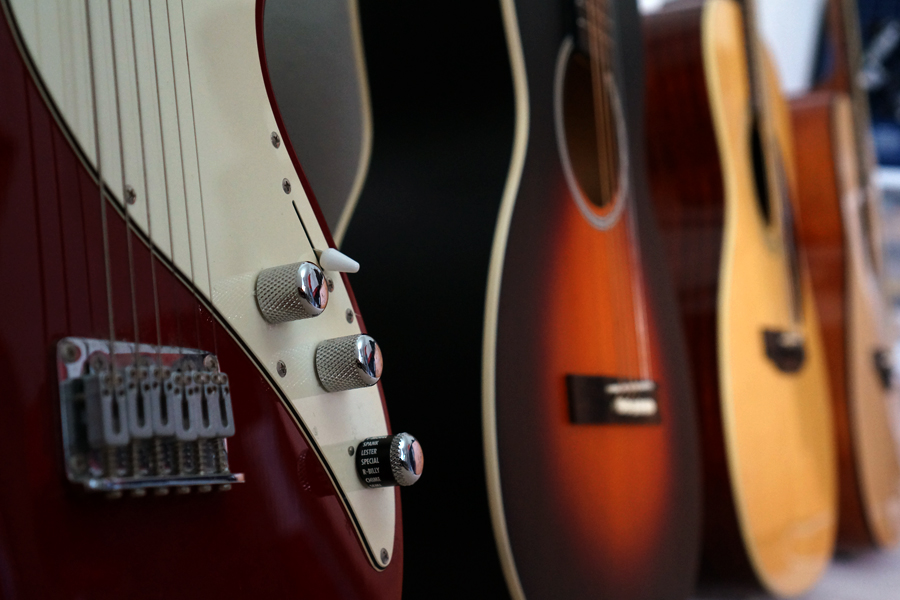 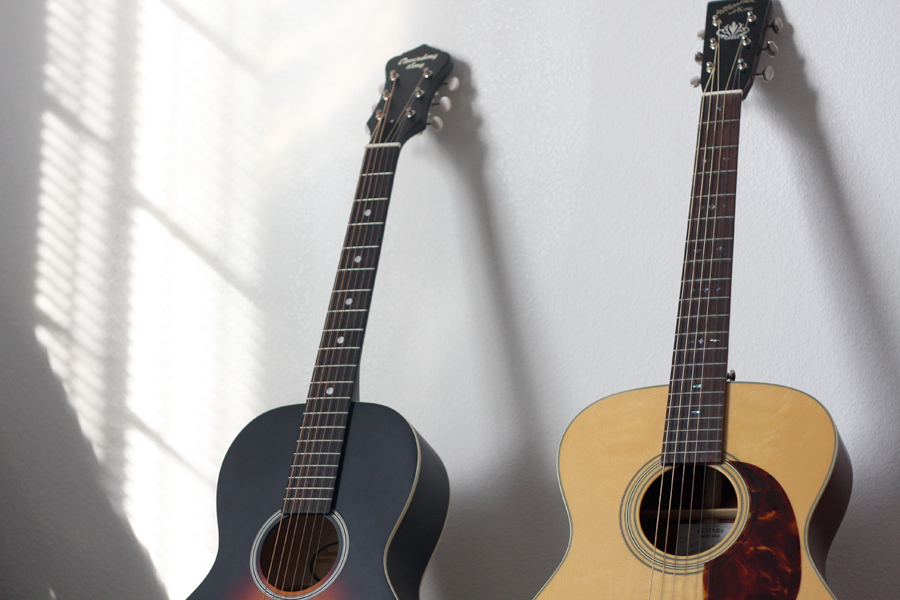 So does this mean I'm done buying "budget" guitars?
Nope!  I have, however, told myself that my next purchase needs to be a banjo before buying another guitar.  (Either the Deering Goodtime 2 or the Recording King R20.)

There a few more I might pick up at some point, if the right deal pops up:
For now though, I've got more than enough to keep me busy, and it will probably be a while before another string instrument finds its way into my home.


Anyway, I hope you found this interesting or perhaps even helpful if you're debating about investing in a budget guitar.  You'll be surprised with how much music you can make for such little cost.