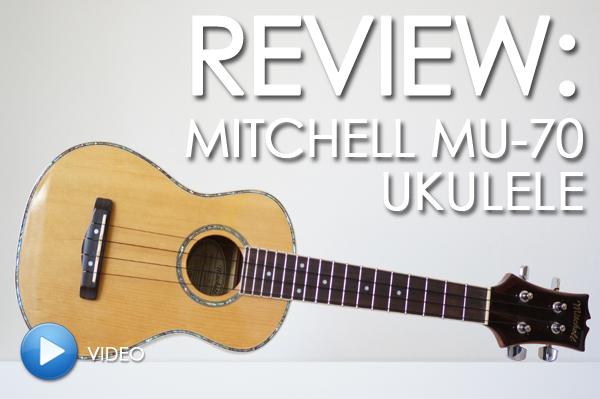 Overall, this isn't a bad little ukulele, but it does have some pros and cons.


Overview & Materials
The Mitchell MU-70 is a 12-fret concert-size ukulele.  It features a laminated spruce top, and laminated rosewood back and sides.  The fingerboard is also rosewood, with mother-of-pearl dot inlays. It has open-back tuners (more about those below), and a handsome abalone rosette and binding. 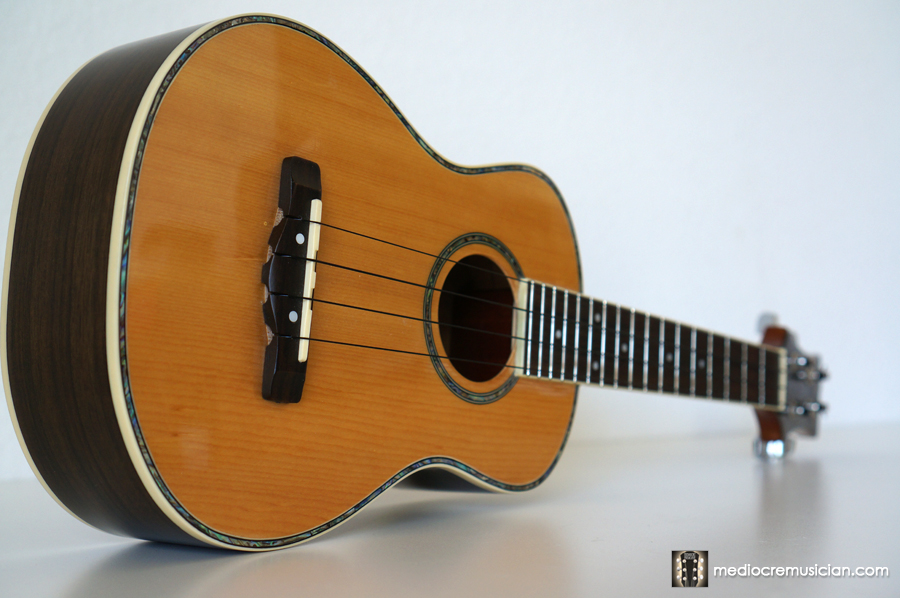 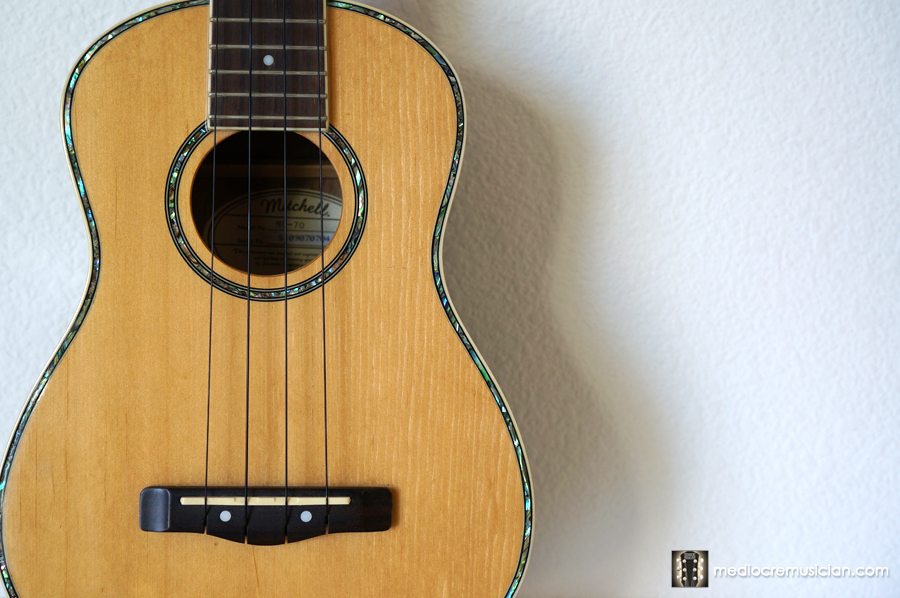 Let's start off with the pros first:

(+) Good Looking
This ukulele certainly looks the part.  The glossy natural wood color looks great, and the abalone inlay is a nice touch.  I also really like the fact that the head has some character and shape to it.

(+) Robust
The MU70 definitely feels solid (probably in part to the heavy gloss coating).  It has some heft to it, even for its size.  It doesn't have any creaks or flex, nor does it feel brittle like some of the cheaper ukes out there.  It feels like a uke that you could toss around and it would hold up well to the punishment.

(+) Inviting/Easy to play
There's something about this ukulele that is very inviting--it says "pick me up and play me".  It's very easy to play, it holds its tune well, and it's very comfortable to play up and down the fretboard (though it does get a bit congested up near the top, but such is the case with all smaller-sized ukes.) 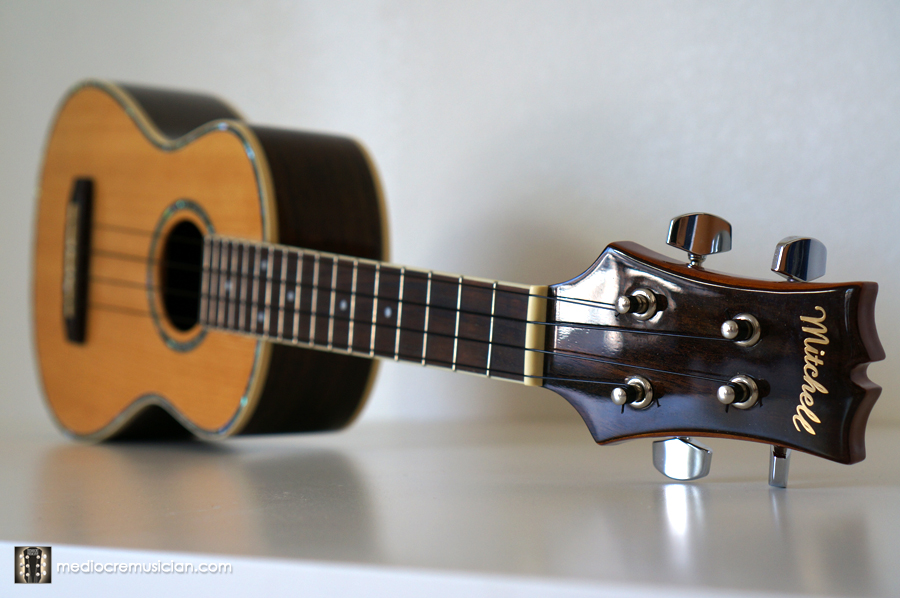 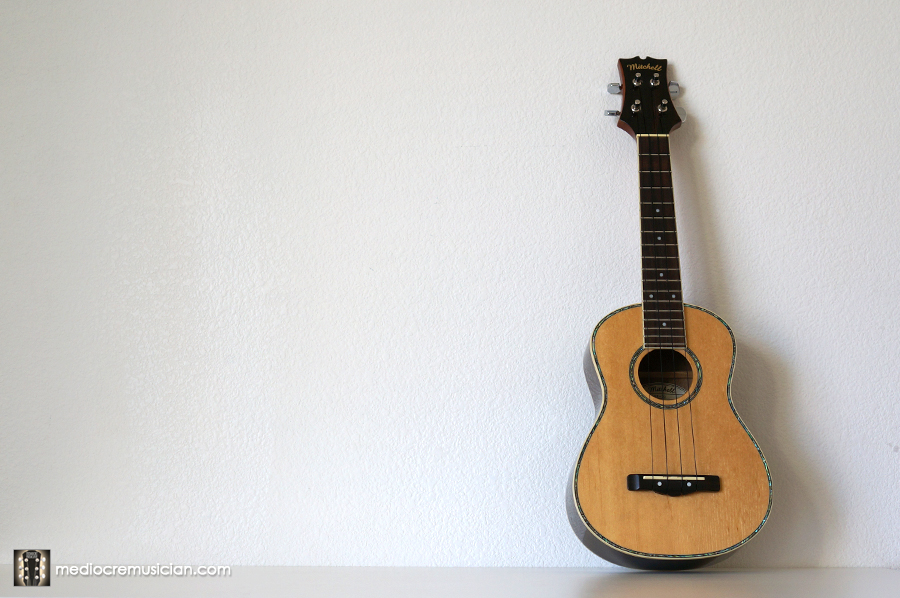 Now on to the cons:

(-) Plastic-Feeling
While all that gloss makes it look good, it also makes the uke feel kind of cheap and "plasticky".

(-) Sound is so-so
Sound-wise, this uke isn't mind-blowing, but isn't terrible either--it's somewhere in the middle.  The one big problem I had with this uke is some buzzing, which is a bummer.  The culprit seems to be the tuners.  I was able to cure some of the buzzing by tightening up the screws on the back, but the heads of the tuners are a bit jiggly, which mean they vibrate on specific notes, and there's no obvious way to tighten just the heads.  (In fairness though, this could be the luck of the draw, and not all MU70's may suffer from the same issue.)

(-) Price
Another big con is the price.  The Mitchell MU-70 retails for about $100.  While this is still relatively cheap for an ukulele, the problem is that there are a ton of manufacturers out there currently making really nice instruments in the budget category.  Personally, I'm always partial to tenor ukuleles (I think they have a bigger sound, and are easier and more comfortable to play), therefore if someone was looking for their first uke, it would be hard for me to recommend this ukulele over the $70 Kala Makala MK-T, as an example.  (Better yet, spend a few more dollars on the Makai MT-70 (my absolute FAVORITE ukulele for the money) which retails for about $135, and can be found as low as $110 on sale.) 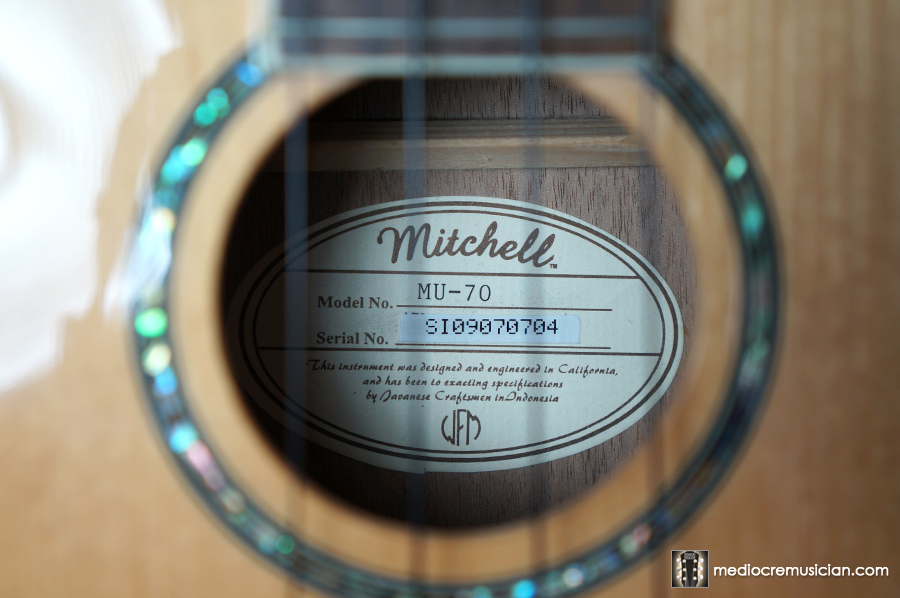 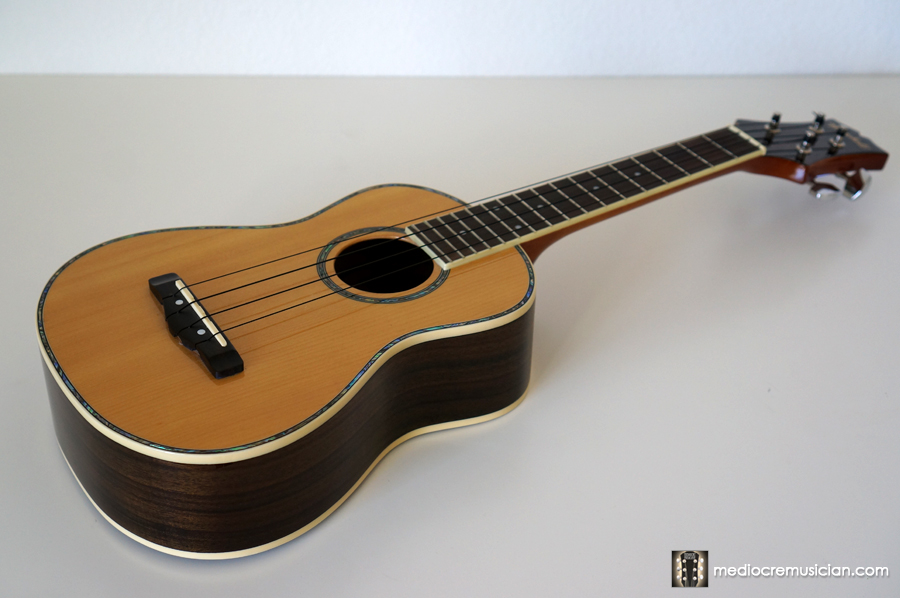 Final Thoughts
Overall, it's a nice little uke. (And again, there's just something about it that makes it easy to pick up, and hard to put down.)  It's certainly worth having around if you can get a good deal on one, or if you happen to get one as a gift.

Who would I recommend this for? Beginners who want something robust--particularly younger learners with smaller hands and who might be a little "rougher" with the instrument than they should be.  This uke will hold up.